Another Sunday and another destination for the Swarm. This time it was a relatively short cruise out to Captain’s Flat about 40km to the South East of Queanbeyan in New South Wales. We had resolved to meet up at the Tulip Cafe at Pialligo for a spot of breakfast and a yarn before hitting the road. Nikki and I thought we may have reached our bacon quota for the weekend having spent Friday night devouring curries and lager with Swarming friends Chris and Nicky, only to be followed by a superb fry up the following morning. I was nursing a particularly nasty hangover which even the baked beans could not ply out of my scone.

Before leaving the house, I gave the scoots a quick going over with the hose and some suds. Embarrassingly, I hadn’t washed them since we got back from the epic trip down South so they were well overdue. The short trip down Majura Road to Pialligo was uneventful which is in stark contrast to our morning commute down this same stretch. No trucks or other people desperately racing to work to grab a parking spot. 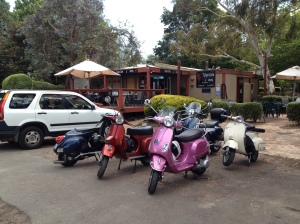 Pialligo houses most of Canberra’s nurseries – a couple of which have natty little cafes. As we pulled into the carpark, the cafe was completely empty and we thought that we’d get some pretty swift service. Within five minutes, the place was full! Strangley, our meals all came at different times which stretched out our stay to and hour and a half. The food was okay but I’m not sure if we’ll go back. With most of needing fuel, we belted over to the airport to fill up. Bill – having gotten his 1964 Vespa 150 going – decided to continue on and let us catch him after gassing up. It wasn’t until we were 20km out of Captain’s Flat that we finally happened across him again.

What can I say about Captain’s Flat? It’s quiet – eerily quiet. A small dog greeted us as we pulled up in town and gave us all a good sniffing before belting off to explore the neighbourhood. Nikki and I went and found a cache while Swarmer Steve did a quick recce of the town on his scoot. He returned and reported that he had found the pub. That was the news we were hoping to hear and a few minutes later the scoots were parked out the front. The friendly publican greeted us and poured a few schooners. He gave us a quick tour of the grand old pub which boasts the longest bar in the Southern Hemisphere. It was quite impressive though the pub’s glory days are long behind it now that the local mine is closed. 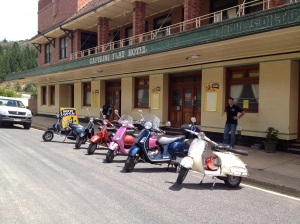 The Swarm is always looking for new locations and these old pubs are usually the kind of thing we look for. I have a feeling we’ll be back for a mid-winter run. Another great destination and another reason to saddle up the ponies. Sweet!

For anyone who lives in Canberra, we know that the warm weather is fleeting. So we try to squeeze in as much Summer fun as we can – and that means scooting!

The Swarm have collectively decided to hit the coast and will be heading for Kiama in mid March. Dave (aka Billy Goat) did some superb scouting for us and rode from his home on the South Coast up to Kiama to scope out some possible accommodation options. With that decided, the rest was easy!

When I first got my scooter, I was wary of Nico’s assurances that the coast was well within reach of my bike. It wasn’t until my very first overnight run with the Swarm (not to the coast – but to Binalong) to realise that I could really go anywhere. Longer distances, however, are so much better with a group. Few things give me greater joy than sitting at the back of a long line of scooters as we head out on the open road. Bogans shake their heads at us, older gents remember some fun times from their youth and little kids laugh and wave. I always have a smile on my face.

The route for the trip is yet to be discussed but I’m going to hazard a guess that we’ll start – as we so often do – at the Shell petrol station in Dickson. Then it will be out on the highway to the Macs Reef Road turnoff to head onto Bungendore (where the two-strokes will refuel for the next push) and then Tarago. A quick regroup in Tarago will get the group back together before picking up the road to Windellama and Bungonia – a couple of little hidden NSW gems. This route will have us pouring out onto the Hume Freeway at Marulan and another fuel stop for smaller scoots. I’ve said before that I detest the Hume – nothing has changed. Fortunately, we have figured a decent set of roads that barely touches the boring boring Hume. From Marulan to the Bundanoon turnoff is all we do. After that, it’s a series of small towns in the Southern Highlands before plunging down the Great Dividing Range through Kangaroo Valley.

Scoots out and about in Mittagong

Then it’s onto either Bomaderry or Berry to join up with Billy Goat before the final push to Kiama.