Spring outings are fraught with climate uncertainty. A couple of years ago we set out in the most questionable environmental conditions imaginable. Even the weather girl advised not to open the door to let the cat in – such was the formidable conditions. We had been watching the forecast carefully through the preceding days of our Spring overnighter to Marulan and thankfully were greeted with a complete lack of rain. Wish I could say the same for the wind! Woefully wild and wooly.

Even to get to this stage was a bit of a pill.

Traditionally, the Swarm (our very excellent Canberra Vespa Club) trundle out to the tiny township of Binalong in NSW to usher in the slightly warmer weather of Spring. On our previous visit – the day of vengeful weather – the club felt a distinct lack of respect from our hosts at the Binalong Hotel and resolved that in 2011, another small country pub would be graced with our presence. Such is the honour of hosting the Swarm! Crookwell got the nod that year and much fun was had by all – especially Bruce and Luke. Bruce personally gave Carlton & United Breweries’ profit margin a sizeable nudge and Luke set about attracting the attentions of the most voracious cougar the town had to offer.  He barely got away alive (and unmarried). In 2012, the township of Boorowa was to be our destination but alas, circumstances conspired against us and all available accommodation was filled. Some frantic phone calls to other candidates turned up nothing suitable. It seems that NSW country pubs are doing just fine thanks. Wanting to be a good team player, I jumped on the phone to the Terminus Hotel in Marulan which had been in the back of my mind since a quick pop-in we made on trip back from the Southern Highlands last year. With only five rooms, accommodation was limited but given this year’s diminished number of attendees, it turned out to be right on the money. So – Marulan. Yep. Marulan.

To most people, Marulan is the ‘place’ that has a petrol station and roadhouse on the side of the Hume Highway. But there’s actually a town hidden away just to the west of  the Hume. It has one very cool feature – but more of that later.

Was I dribbling about some wind or something? It was windy and uncomfortably so. Vespas are light and when it starts to get blowy, riding gets less and less fun because so much energy is spent just staying in a straight line. Add to this our route through eucalypt lined roads, which keeps your eyes constantly scanning for falling branches, and it makes for some unhappy scooting. But whatever – it’s scooting so it’s fun!

We have a great route to Marulan that runs from Watson in the ACT, to Bungendore, Tarago, Bungonia and then a very short stint on the Hume to bring us to the town. 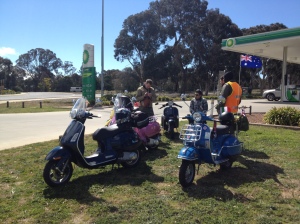 We welcomed new Swarmer from Wagga Wagga – Bucko – who arrived on his blinged-up PX150 Nuovo complete with Australian, Thai and Italian flags! Very cool. The group was rounded out by Chris, Nicky, myself, Nikki, Steve, Bruce and Swarmleader Bill who was just joining us for the ride to Tarago and lunch. I wish I could say the ride from A to B was an enjoyable one but I must admit that I was glad to be in Marulan and off the scoot. Bleh.

The Terminus Hotel was promising. A slow combustion stove and a small crowd. The Scottish barman (who moved to Marulan for a girl – who then gave him the flick) was entertaining and attentive. The rooms were clean but a little on the cold side. The night carried on like so many have before – beer, food and serious scooter-related conversation. A promotion on the door promised some live entertainment provided by ‘Sneaky Pete’, who didn’t show up. Instead, some bloody awful karaoke ensued which rolled out all the favourites. When I say favourites, not our favourites, but someone’s favourites.

So it was that we greeted Sunday morning free of hangovers so I’m not sure if we can say that our night had been a cracking success. It was nice not to feel like a piece of crud for a change but I still reckon something was missing. I quickly forgot my disappointment when I sipped the coffee at the Meridian Cafe. The best I have had in a long time. As the rest of the team joined us, we ordered breakfast and eventually tucked into a really tasty feed. Top notch. A fellow ACT biker joined our table and quickly got on the outside of a very wicked looking piece of sponge cake. We’ll be back to sample that one! But seriously, the Meridian just might be our regular stop on the way home from Sydney now. Yum!

So this brings me to the very cool Marulan fact. The picture will explain all….. 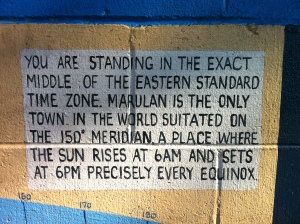 To geocachers, this spot is extra special. So Marulan meridian life is good. We also explored the town’s heritage trail and the local craft store. Nikki bought her niece a hand knitted hot air balloon mobile that just a bit cute. Others stocked up on some home made jams and lemon butter all sold with plenty of smiles and thank yous from the volunteer ladies.

The weather for Sunday’s ride home to Canberra was pretty much perfect. Sun, sun, sun but not hot, hot, hot. A quick diversion had us scooting to nearby Tallong and its idyllic patch of national park overlooking the Shoalhaven River. It seemed like nothing could spoil such a beautiful riding day. Enter the Monkey Bike. Monkey Bike is Bruce’s seemingly indestructible ’63 VBA. Nikki reported hearing some loud pops early in the ride home but he still seemed to be scooting along just fine. I had decided to ride ahead to take on some corners I’m fond of only to be caught by Nikki later on with the report that Monkey was in trouble. Reluctance to start, go and keep going. That’s my technical explanation anyway. We decided to ride on to Tarago and await the arrival of the rest of the group. We were actually pretty confident that all would be fine. Chris, Steve and Bruce have plenty of two-stroke knowledge between them. After we had downed a coke, hidden a geocache and chatted to some passers-by, it was getting obvious that all was not fine. I jumped back onto Giorgio and headed off in the direction we had come. I found the group only five minutes up the road standing around Monkey Bike scratching their heads. No matter how much he was coaxed he refused to start.

Takes a licking and keeps on ticking – sometimes

An agreeable grazier agreed to let Bruce wheel the Monkey onto his driveway while he got dinked back to Canberra to fetch Chris’ ute for recovery duties. Hard luck Bruce. Monkey Bike was rescued later that evening.

Bungendore marked our scatter point as some headed for the Queanbeyan route to Canberra and the rest of us (Bucko, Steve, Nikki and myself) made a bee line for the Federal Highway just north of the Capital. Again, just stunning riding conditions. And so it was over. I really don’t see us returning to Marulan for an overnight run but I’m glad we’ve ticked it off the list anyway. Next year we definitely need to get ourselves sorted earlier!

Here’s all our photos from the weekend.